Most Americans think the nation is no longer the world’s leading economy, according to a Gallup poll released Monday.

Despite market turmoil and a slowdown in growth, 50 percent of those polled said they think China is the top global economic power, with just 37 percent saying they perceived the United States as number one followed by Japan at 5 percent.

The results are a sharp contrast to what was seen in the early-2000s, when the U.S. held a commanding lead over both countries. 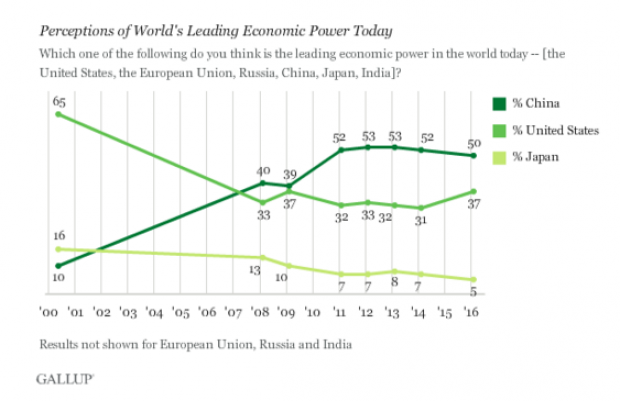 While China has edged out the U.S. in terms of perception of economic strength, 44 percent of Americans said they think the country will return to being the leading power in 20 years, compared to 34 percent who named China. 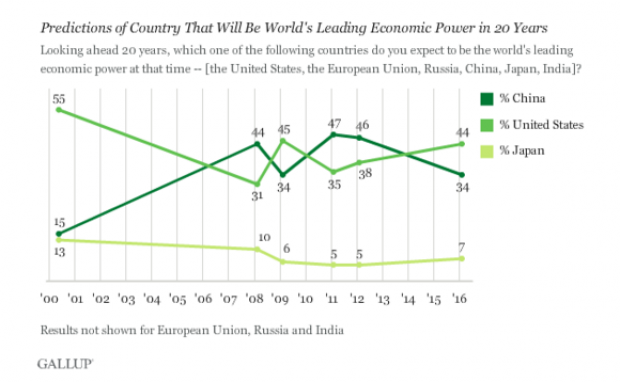 According to the polling organization, determining who is the strongest economic power can be a difficult process as the U.S. still has the largest GDP, but the International Monetary Fund said China is the largest.

The poll was conducted from phone the phone interviews of 1,021 adults across the country from Feb. 3-7, 2016 and leaves a margin of error of plus or minus 4 percent.

Content created by The Daily Caller News Foundation is available without charge to any eligible news publisher that can provide a large audience. For licensing opportunities of our original content, please contact licensing@dailycallernewsfoundation.org.