“Sherlock”: A Study in Ourselves

For the last six and a half years, Sherlock’s obsessive fans have been putting up with years between seasons while they wait for just three episodes showcasing their hero. The fanaticism isn’t new at all: when Sir Arthur Conan Doyle was writing his stories, he got tired of it all and killed Sherlock Holmes off. Seemingly all of England responded by wearing black in mourning and writing him strongly worded letters demanding he bring the detective back to life. Sir Arthur refused until Queen Victoria joined the cry and personally wrote him asking for Sherlock’s return. He more or less had to bring Sherlock back after that. 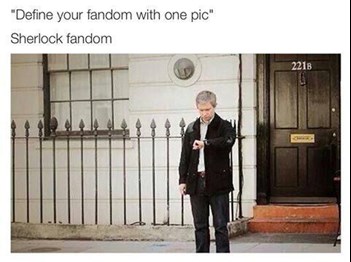 e, but so do a lot of characters, even within the same genre. So why does Sherlock command such following with every reappearance over the 130 years since his first adventure, A Study in Scarlet?

Because, more than anything – yes, even more than Benedict Cumberbatch’s voice and Olivier-awarded talent – Sherlock is detecting human nature in his criminals, and human nature doesn’t change. When we watch him, we watch ourselves.

Observing from a Distance

In his latest revival, Sherlock is a “high-functioning sociopath,” which manifests as a “mostly unemotional conceited genius.” He would be infinitely irritating if he didn’t have Watson on hand to call him out. Instead, the two engage in a constant sass battle, entertaining and providing wonderful material to draw on later.

In his criminals themselves, however, Sherlock has the surprisingly empathetic ability to look past his own unemotional self and see the emotions of other people. Perhaps he’s so good because he’s unemotional – he mentions several times that he’s had to actually study the phenomenon of human emotion, while Watson and the rest of the cast, including us, merely assume it. “You see but you do not observe,” Sherlock complains to Watson constantly. “I know, I know,” Watson’s face says, but he doesn’t really know. Nor do we.

Sir Arthur was the first crime writer to incorporate evidence and forensics into his hero’s solutions, changing the genre forever. But even strict analysis shows you the emotion behind the act. For example, in Sherlock’s first episode, “A Study in Pink” (see what they did there?), the bad guy (spoiler) gives himself away because of a picture he keeps in his cab car: a picture of his children with his apparent ex-wife cut out.

But why is this the clue? It tells Sherlock the criminal’s entire motivator – love. “It’s not bitterness,” he thinks aloud, “bitterness is a paralytic. Love. Love is a much more vicious motivator. Somehow this is about your children.”

At this point in the show, Sherlock doesn’t love anyone. But he understands it, and we are told that the victims all understood it as they faced death too, forced to choose between themselves and their own loved ones. Love turns out to be the most common motivator throughout the course of the show, more than money, more than revenge. As Sherlock says, it’s the most vicious one. But you don’t necessarily see observe that.

The next four seasons – only a dozen or so episodes – are a rollercoaster of emotion, otherwise known as a study of pain, joy, loss, gain, and the strength people have in the face of emotional adversity. A lot of shows and movies look at the endurance of the body, but Sherlock looks at the endurance of the spirit. How many times can you lose love before you give up trying to find it again? How often can you face reverberating rejection before the ripples permanently affect you? Is it really so noble to give up your life for your friend, or are you just forcing the survivors to live with the memory and guilt so you don’t have to? Where are the lines? Is the line objective or subjective? Do you have lines if you’re a sociopath? Does genius transcend the lines?

Creators Steven Moffat and Mark Gatiss – who also plays Mycroft Holmes – spent the last seven years tackling these questions, putting every character through these problems. But they aren’t confined to BBC One or Netflix. Anyone who’s gone through any emotional trauma, even just a middle school breakup, has wondered the same things to an extent. There’s nothing new under the sun, only slight variations. But even then, the variations are only there if you don’t observe closely enough.

Let’s skip to the final episode, just released a couple weeks ago: “The Final Problem.”

I’ve read some of the original stories, I’ve read some kid versions, and I’ve watched multiple reincarnations made over the last 80 years or so, but this episode still surprised me. The callousness of the study of humanity was so unattached it shocked me, even after years of watching this particular star sociopath try to figure out what on earth “feelings” are.

For those of us with a normal range of emotion, there isn’t a lot about the study itself that’s new. But the person doing the study teaches us a lot about human nature itself. It’s strange, but sometimes we need to see something abnormal before we can understand the normal. Sherlock himself had been doing that for us for years, but even he was “normal” enough to only get us so far. This was another level.

Sherlock has shown us so much about human emotion and human nature through the years because he’s objective and (unintentionally) kindly walked us through his reasoning thanks to good script writing and cinematic effects. It’s like when you don’t see things in your own relationships until an outsider points them out. But if the show is a double bluff of learning directly from an outsider, “The Final Problem” is like the triple bluff the criminal in “A Study in Pink” suggested: an outsider is looking in – the first bluff – and we are on the inside looking at the outsider – the second – but in doing so we’re actually looking at ourselves – the third.The entire series does that. Would we make the same choice the first victims made in “A Study in Pink”? Would we threaten others to protect our own? Would we carry out the threat? Do we look at other people’s actions and see their motivator as selfishness or bitterness, or do we look for that deeper motivator that could make the person more human to us? Sir Arthur’s original stories asked the same questions, but Sherlock manages to make them more explicit, more painfully relatable, and easier to understand, even amidst all the banter.

It’s a dangerous game to see the bad guy as a human being like us, driven by the same things we are. Maybe that’s why Sherlock tries to remove himself from “the rest of us” and why we try to remove the bad guy, and why we love watching Sherlock take care of these criminal problems so we don’t have to.